We will most likely have a team of people from Poems While You Wait, a group that comes to these events to type up an original poem for anyone who requests.

Remember, typewriters of any generation, manual or electric, working or damaged, are always welcome. Refreshments will be served. See you there!

This past weekend the Quirky QWERTY turned a year old. Yep, I was able to stick around for at least a year to serve you typewriter entertainment and information. This year alone the Quirky QWERTY held a record three type-ins on its own, not to mention the numerous others that were held by other organizers. To celebrate this blogs’s first birthday, I’ll review some of my personal favorite posts from this last year, along with a link to their destinations.

Starting in June, Cameron Peacock of the Changing hands Bookstore in Phoenix held the 8th Phoenix type-in. Many familiar faces made the event, Including Joe Van Cleave, all the way from New Mexico. He, of course, brought his recording equipment and interviewed several typewriter aficionados, consisting of Cameron Peacock, Ted Munk, Bill Wahl, and myself.

Until a longer one is held, this seven hour type-in as far as my knowledge goes holds the world record for longest type-in. It consisted of many great events, including a speed-typing contest, where the winner received a 1940s Underwood, and a viewing of the typewriter documentary, “California Typewriter”.

This type-in will always live in the type-in hall of fame, at least in my opinion.

In July, I started participating in Joe Van Cleave’s typing assignments, in which he gives his audience a month to write a prompted short story, where it is then featured in a video of his. The Prompt of this short story was to write about science fiction. This really brought out the creative juices in me, and so I whipped out the old Royal QDL and got to work. I eventually came up with a story about animal species evolving rapidly, and claiming the Earth away from the humans. I titled it Evolution.

In September, Joe published a creative video called Free Typing Paper. It’s pretty much exactly what it sounds like. With the purchase of an item at any store, it is more than likely that you will receive a receipt. As Joe explains, these slim little pieces of paper are perfect for typing out little poems and thoughts. He even demonstrated how to make it look artsy by applying coffee stains. Of course, I had to try this for myself, and I loved my result!

Another video by Joe displayed creative typewriter art one can create with just a crayon, a blank sheet of paper, and a sturdy typewriter. By typing over a thick layer of crayon on the paper, one can create colored type, but I took it up a notch and created shapes with them.

and last but not least, the most recent post…

I spent a Sunday afternoon with the legendary Bill Wahl at the Tempe History Museum at an event known as the Hayden’s Ferry Days. Here he displayed machines from the early 20th century on a large table while he and I informed people of the pre-computer era. It was a lot of fun, and I got to walk around and view other local business stands, enjoy free ice cream, and get a couple of free poems.

That about wraps the last year up. There were so many great posts, and I look forward to the year ahead!

A couple of months ago, Bill Wahl of the Mesa Typewriter Exchange invited me to join him for a while at an event in Tempe, Arizona, known as the Hayden’s Ferry Days.

Hayden’s Ferry Days is a yearly celebration of the history of the city of Tempe. Held right outside the library and museum, they offer games, food, and fun. Bill Wahl has been invited year after year there to showcase his large collection of antique typewriters, most from 1902-1910, and to educate people of all ages about the “computer of the 20th century”.

Though the event goes on every weekend for a month, Bill was only here for a few hours on Sunday. During this time, Bill and I introduced some new faces to the machines, and some ones that seemed overjoyed with meeting them again.

As you may see in the background, Poems on Demand attended the event, always looking to pound out a masterpiece for anyone who dares ask. I, of course, can’t come across them and walk away empty handed, so I asked for a poem about the prehistoric machines featured. I was lucky enough to come out with two, one each from a separate poet. One of the poems was about a secretary who might have toiled away at one of these machines, and the other was about the words hidden within a paper, that only the typewriter can free:

While the poets were hard at work with my piece, I got to walk around and explore the beautiful typewriters. Seeing these prehistoric machines in person amazed me, and I couldn’t walk away without capturing them in their unique beauty.

An interesting fact worth noting of the Bennet above, is that when any key is held down, it’s design made it so all the keys came down with it. For example, if the space key on the top was hit, the T,Y,G, and H keys came down as well. If the W key was hit, the S and X would also lower.

The Blickensderfer featured above is an interesting German sounding machine. Looking at it, it reminds me of a manual machine stripped of it’s shell, equipped with a ball similar to that of one in an IBM Selectric.

Though I didn’t get a picture of the front of this 1902 Underwood (what a great machine!), I thought a feature shown from the side of it was worth noting. This is the only machine featured here at least, that did not come equipped with it’s own ribbon reverse. Imagine every so often, having to take the the dial shown in the rectangular hole, and spin it by the handle until the ribbon was reset. Talk about first world problems! Despite being 117 years old, this is probably the easiest machine to type on I have ever had the honor of tending to. They sure don’t make them like they used to!

Alas we come to the black (or rather turquoise) sheep of the crowd. This 1930s Underwood almost wasn’t displayed, until I heard an organizer begged Bill to keep it out, as it is arguably one of the most beautiful machines ever produced.

Normally I only write about typewriter-related subjects on this blog, but walking around the event, I saw something so different and creative, I can’t help but share it.

Parked proudly in the middle of the event was a classic BMW automobile, but what was done to it was the fascinating part. Upon closer inspection it is clear that the whole body had been painted with chalkboard paint, earning it the appropriate nickname, “chalkboard car”.

Standing next to it was what I assume to be the owner passing out chalk, free for any artist to draw whatever comes to mind on the vehicle.

All in all, it was a great event, and I owe it all to Bill for inviting me to go. Hayden’s Ferry Days in Tempe is still in progress every weekend until March 16th. The event was free the day I went, but some activities may cost money. I would highly recommend checking it out. If you want some more information, click the link below:

If you’re like me, you obviously have a passion for most typewriters. You create art with them and collect as many to your heart’s content (at least as much as your wallet will allow). However if you’re still like me, you might find that sometimes you’ll fall out of routine with your machines. They’ll stay in their cases longer, you might not be trying new things with them, you’ll stop reading typewriter blogs, and yes, you won’t update your blog quite as often. This is the subject I am addressing today.

To get rid of the elephant in the room, I admit I have not been blogging as often as I should, and it’s because I have “fallen out of routine”. It happens to the best of us. My good friend Bill Wahl at the Mesa Typewriter Exchange has talked about this matter before as well. He says he sees the public of typewriter enthusiasts like a wave. At some times, the wave is like a tsunami, and lots of enthusiasts are gathering, blogging, organizing type-ins, etc. At some times, it’s quite the opposite. People fall out of interest for a few months. Not as many type-ins are gathered, and bloggers might not update on a routine basis. I have been at the low end of the wave for a while. Ever since the last type-in in December, I just got burned out. The machines have been staying in the cases, and I just haven’t been updating. This kind of thing happens every once in a while, not just for me but for the public.

However, there is light at the end of the tunnel. The good thing about this “break” is that we can slide the carriage right back, fresh and restored. And after the break, the interest pops right back up again, and we break out the old friends. I believe this to be the stage that I am at right now. And after this, it’s possible that I might only post once-a-month, or on another routine like that. The important thing is, I’m ready to serve the typewriter community again.

I won’t leave you without some pictures just for fun though!

And yet another type-in is concluded. These events always lift my spirits. 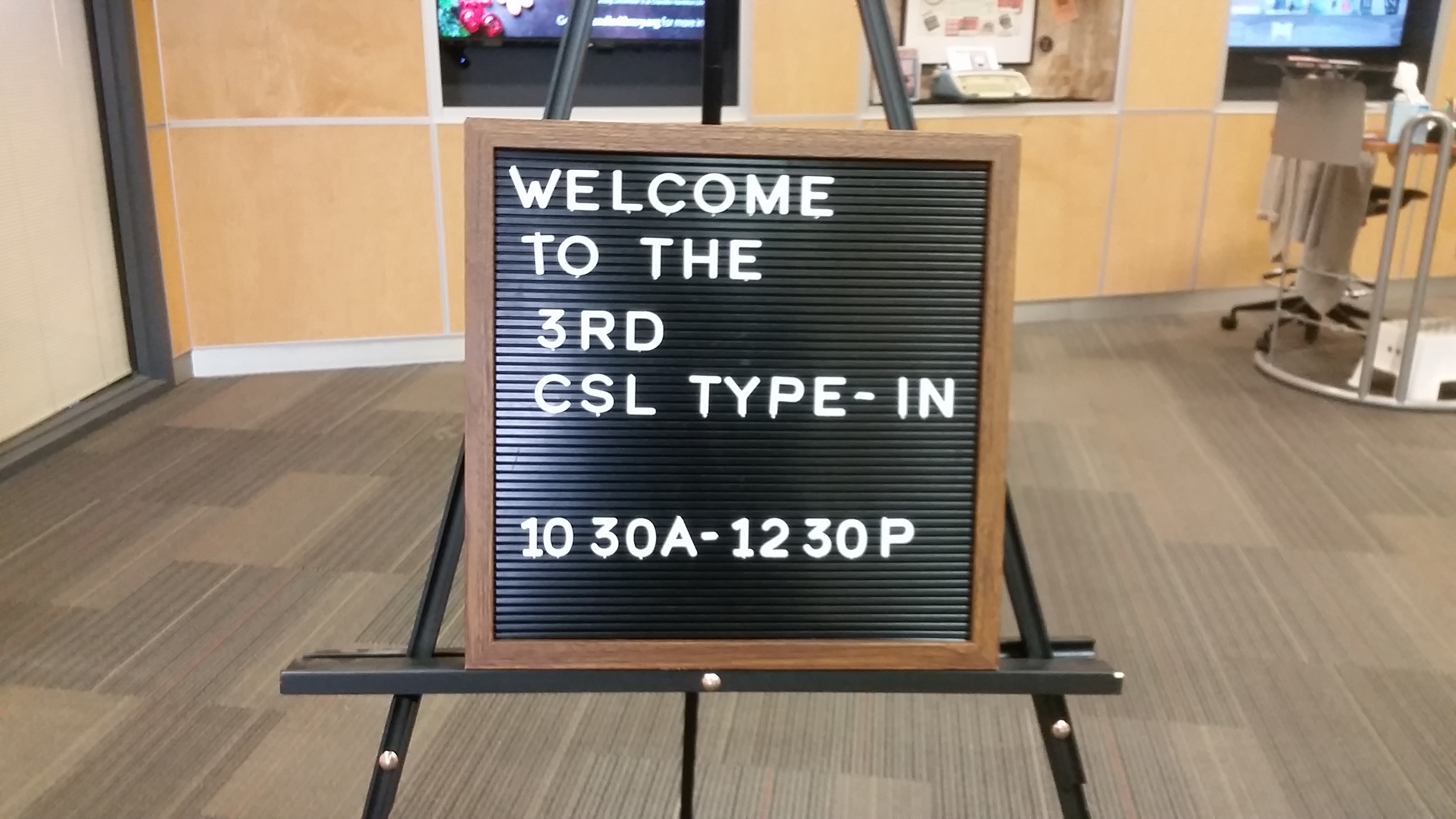 All the usuals showed up, such as Bill of Mesa Typewriter Exchange, Ted of the Database, and Cameron of First Draft Book Bar.

Though we didn’t quite get to the story time, I think it was alright, as all the attendees seemed satisfied at the machine they were currently putting to use. Besides, it was made up for with the festive lights that lined the tables.

And of course there were the snacks that immediately disappeared when feeding the hungry typers hard at work.

Unlike the last couple of type-ins, this one offered a steady stream of guests, rather than large waves all at once, which was wonderful, as it gave me an opportunity to take time to help each newcomer, even a young set of triplets! As the grapevine says, they were the lucky to go home with a Webster, though I don’t know exactly what model.

There wasn’t a drawing this time around, as we could not snatch up a nice typewriter from around the valley soon enough. Nevertheless, it was enjoyable event.

As always, a bounty a typewriter coloring sheets were provided, and entertained some young guests.

And I always thank the library for the clever button making machine: 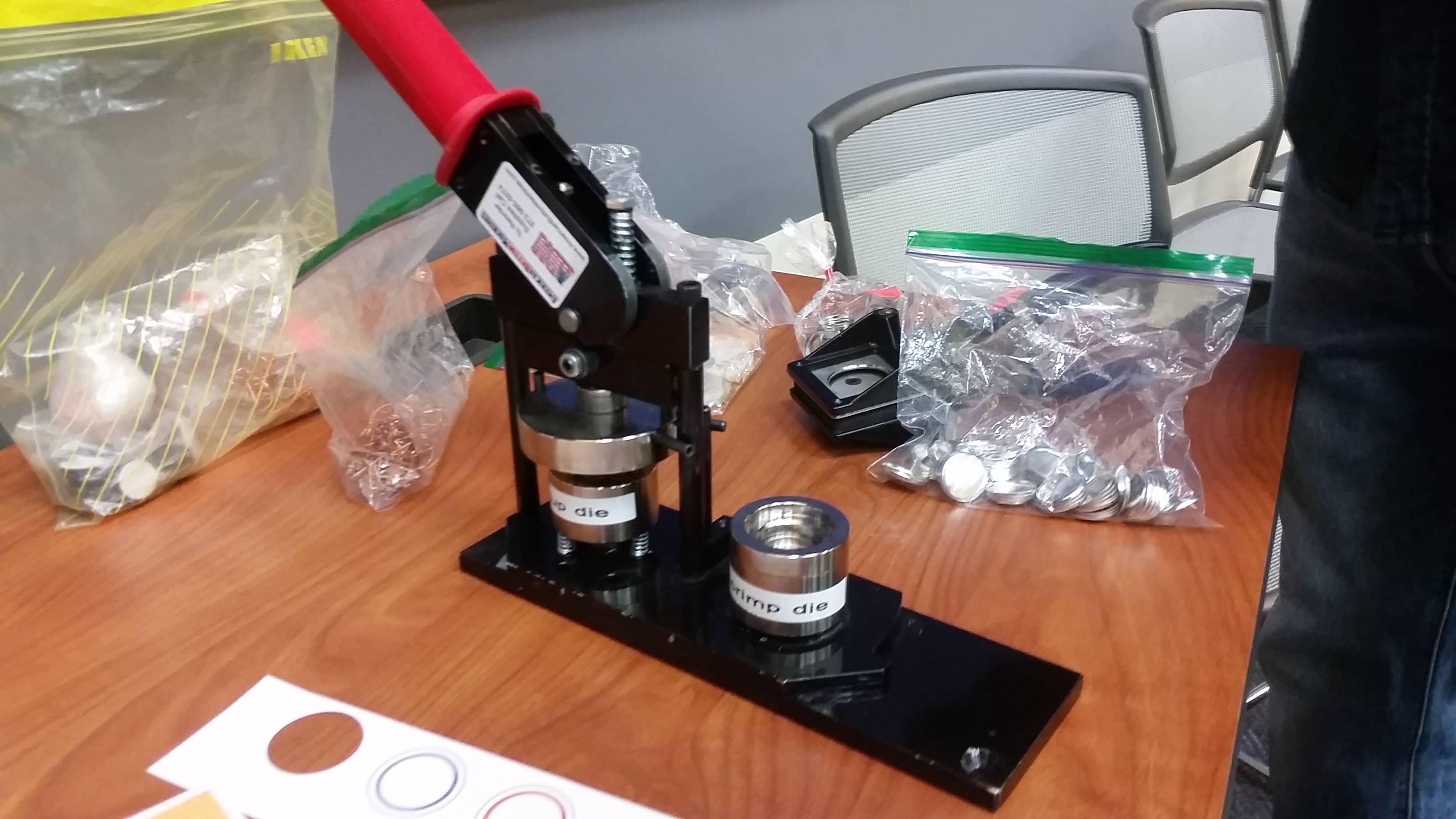 I even went home with some new pins added to my collection!

Something new that showed up at this type-in provided by the library were cards with typewriter-themed quotes. I took one home for myself:

I can always thank the library for the generous display of typewriter books, always there to entertain the guests.

This just about concludes the report of the the 3rd CSL type-in. As always, thank you so much to the librarians at the Chandler Sunset Library for making this such a successful event!

Before I go, here are some final pictures of the type-in in action: 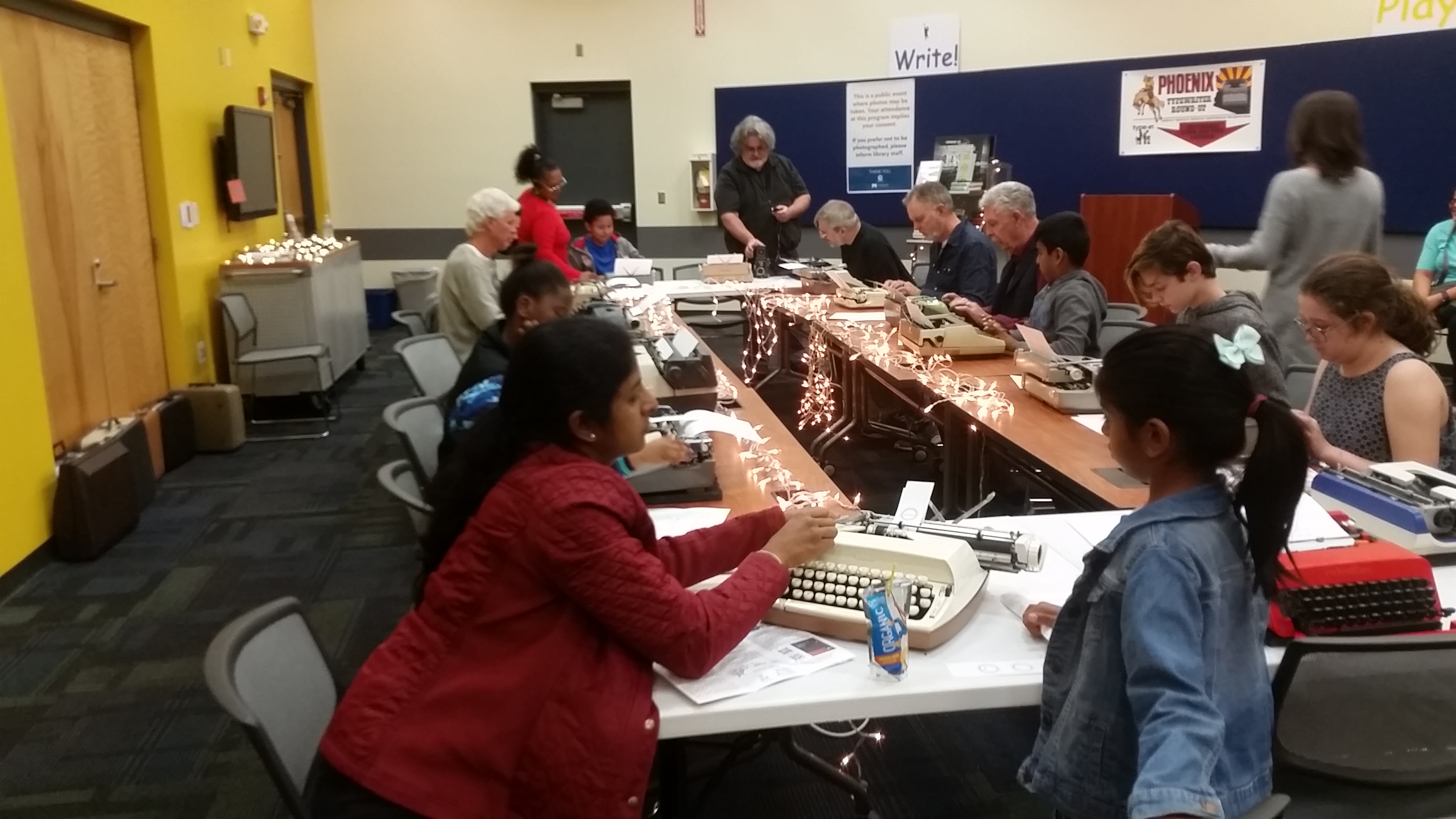 Thanks to all who came!